On this tab you can create new tests and edit or delete existing ones. This is the centre of the entire panel. After creating a test, users will come back here to monitor error logs of the specific test.

You can set the following test properties on the test tab main form:

After creating the test and sharing it with test participants, you can monitor any problems that may be encountered. Any problems related to the test logic (R) or test templates (javascript) will be recorded here so you can eliminate it later.

Variables declared here will form a return value of concerto.test.run (used to run test inside another test) function from Concerto package. The return type will be named list formed from variables declared as output variables. Return variables are also saved for all completed sessions and can be used later by Concerto remote client or any other external application.

The test logic is written in R code. You can use any R code you wish. Whatever R package you have installed on your system can be used in Concerto test logic code. Concerto comes with its own R package named concerto whose functions can also be used here. This section is the most important part of the whole Concerto panel as this is where you declare how the test should work.

When you start test debugging, your test logic R code will be interpreted line by line and any output produced by R will be inserted below the line of code that produced it.

You can use the following key commands when the test logic R code has focus:

Used for test debugging. It will show you your test logic output. 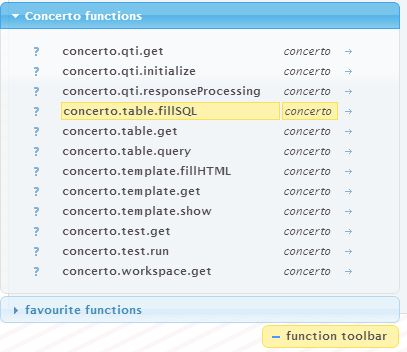 It contains all Concerto functions from concerto R package in one place, ready to be inserted into your test logic code as a function wizard. It also contains all functions you added to your favourite functions. You can remove any function previously added to favourites from here. You can get full R documentation of any function listed here by clicking the question mark icon next to the selected function.